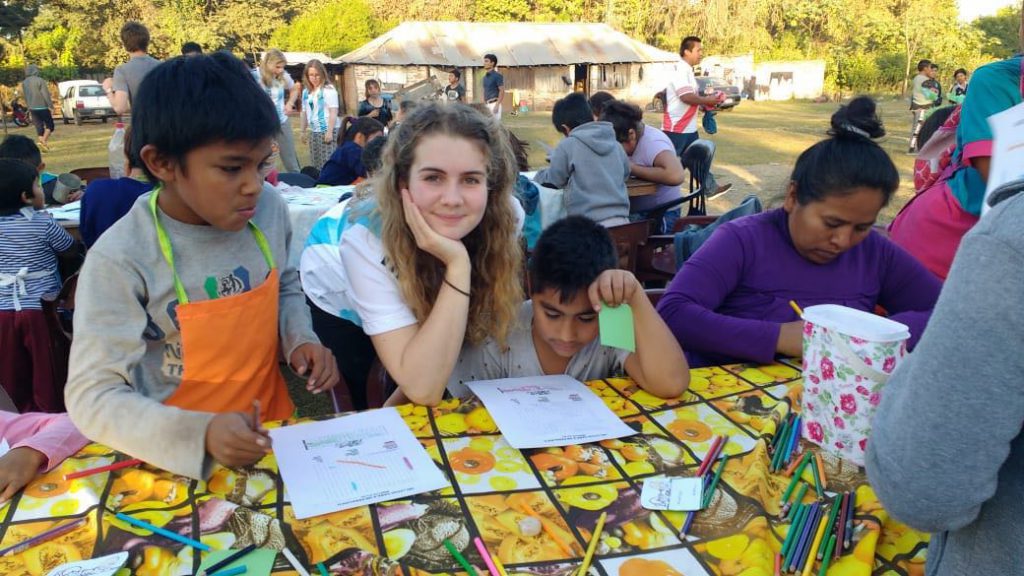 Hola for the last time from the Spring Step team 2018! We are sadly coming to the end of our time here in South America but we have had the most amazing experience and it’s been a pleasure to share it with you through these blogs. We had a great but busy last week in Tartagal with the last push of work and full of goodbyes, and then we left reluctantly but blessed by everyone we had met.

On Monday, our last day off, we went to our friend Victor’s (who works with us and whom we are very fond of) house for lunch. He and his large family were very generous to us, welcomed us in and cooked masses of Argentinian chicken and rice. We also got the opportunity to pray for his mother in Spanish and English as she was having a difficult time at that moment. In the afternoon we did another freedom in Christ session on breaking strongholds that we have in our lives, our final session together as a group but still so useful and encouraging. Then in the evening we relaxed and played games with one another ??

We awoke on Tuesday morning with nervous excitement and anticipation for the must-win-game between Argentina and Nigeria that would take place later that day. This game would determine whether or not the Argentines would make it past the group stages of the World Cup and into the final 16. But before any songs or chanting could start, we had to prepare for the long day of work ahead of us. Following our morning devotional, we packed some fruit and multiple water bottles to take with us since we would be working right through from 9am until 2pm in order to efficiently make the most of our morning. With many of the rooms successfully concreted, the next job was to dig deep trenches, which would support the plumbing system for the bathrooms and kitchen. After work, we walked to Nora’s house (Marco and Dany’s Mother) ready for the delicious lunch she very kindly prepared for us all. We were all Argentinians today and stood up for their national anthem and cheering throughout the match. Groans rang around as Nigeria opened the scoring but following an absolute screamer from Angel Di Maria our moods picked up and we felt very much back in the game.

However, the atmosphere steadily grew more tense as we watched the clock tick ever closer to 90 minutes, the score stuck still at Argentina 1-1 Nigeria. That man again, Lionel Messi, as ever carrying the Argentina team through; he took a shot at goal, which deflected off Marcos Rojo, past the Nigeria keeper and into the back of net. No one was sat down at the dinner table anymore. Everyone was on their feet, jumping up and down, cheering and hugging each other. Barely 5 minutes from full time and Argentina had done it, through to the knock-out stages of the competition. Our celebrations, however, were nothing compared to the utter chaos pandemonium ensuing in the plaza. As we walked closer to the square, noises became louder and more defined. The scene that met us was incredible: car horns blaring as they did rounds of the square, horns blowing, motorcycles roaring and Spanish voices singing and chanting as people jumped on the back of pick up trucks and celebrated on stages and balconies. We celebrated with the people of Tartagal and walked around the square, taking in the joyous atmosphere before heading home. Later that evening, we took the opportunity to Facetime German and his family in Chile: Neve, Elias and Emi. We appreciate every opportunity we get to talk to German, updating him about the project and our lives in Argentina, while we also eagerly listen to news about himself, his family, friends and the progress of the church building in Tragna-Boroa. After an emotional call, some of the team had dinner while others went for a late-night run during which there was a power cut and a samba band at the paseo.

Due to our increasingly busy schedule, Wednesday was our last full day of work at the building site. We continued with making the concrete for the foundations, completing the bathrooms and filling in the trenches dug for the plumbing. Abel arrived in the morning with tea and facturas (custard pastries), which brought much needed joy and energy.  In the afternoon we were joined by members of the youth (Marito, Abel, Martin, Facundo, Estevan, Juan, Rey and Victor) from the church who gave us a hand, speeding up the process significantly. Despite the hot weather we managed to get the rooms done, leaving only the front of the building to concrete. In the evening we had the final daughter church service in which we sang the Open the eyes of My heart and Marco preached.

On Thursday the whole team was able to start concreting the outside porch area of the Sunday school, which like the majority of our work involved a lot of heavy lifting and was very tiring! As our working hours on the building site became shorter, the work became more intense, however it was made easier by the great company we had from the guys that would come and help us on a daily basis. We have valued them SO much over the past two months and will really miss their joking and friendly banter that has really made time fly!  Having said this, work was stopped early that day due to England v Belgium match that afternoon and considering the entire of Argentina freezes when they play in the world cup, we thought it only fair that we took the afternoon off to support Gareth, Harry and the rest of the lads. Although the result was slightly disappointing, we had a great afternoon eating spaghetti cooked my Marco’s mother! We were also joined that afternoon by Dany and Priscilla, who are staying with us until we all leave together very early Monday morning. The day ended with all of the girls going out that evening to the local market to buy (most definitely fake) Argentine football shirts, in order to celebrate what we knew would probably the last time Argentina played in the world cup the following Saturday.

Friday – last day of work! We only worked for the morning finishing concreting the outside porch, by this point we were practically professional concreters, meaning we finished it off in no time! This meant that the rest of the morning was spent messing around trying to get each other into the leftover concrete on the floor. However, with the Argentinian youth being substantially bigger than all of us… we didn’t stand a chance; we all arrived home VERY muddy.

After lunch we had the kids service, for which we planned a sketch for them, However we arrived to see the kids were already doing some Bible word searches and colourings on Jesus making the lame man walk after forgiving his sins. So instead of doing what was originally planned we just played games and spent the whole evening running around and laughing with them, which turned out to be a really nice way to spend our final week there. After many photos and lots of hugs, we finally managed to drag ourselves away from them and head home. In the evening we had Marco and family, Dany, Flavia, and Priscilla all round for a traditional English tea party,