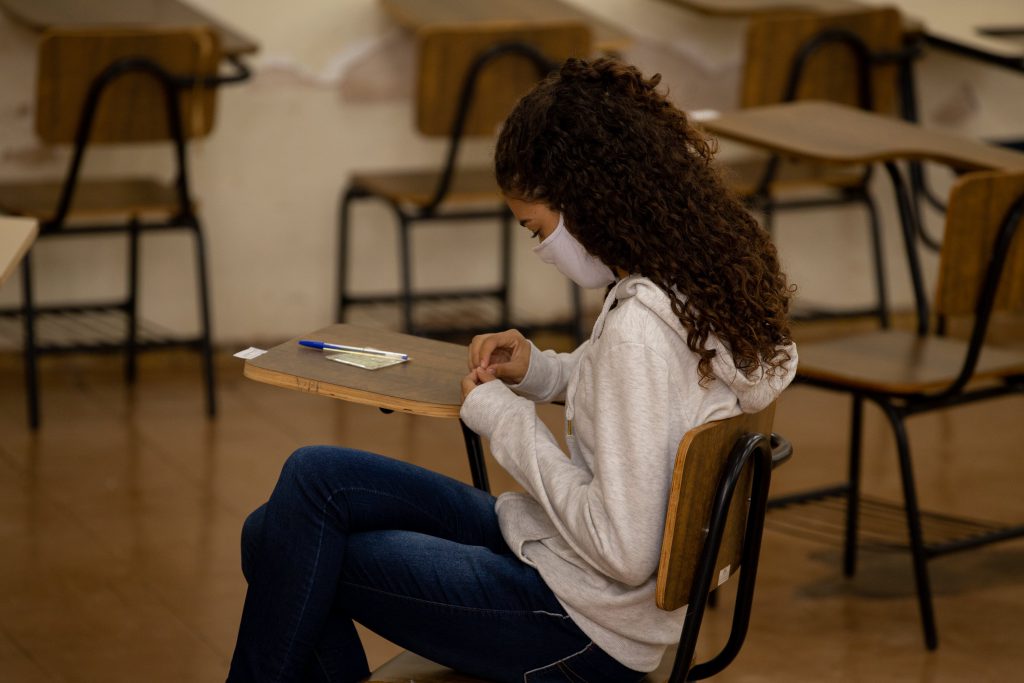 Maria has got very good at hiding the fact that she can’t read. “But it is so tiring,” she says. “I always have to have somebody else with me in case I need to read a sign – all the time trying to hide my problem from them. I don’t know what work I could do. The worst thing is not being able to help my kids with their homework – I feel ashamed of that and it really makes me want to learn now, if I can.”

FROM FOOTBALL CLUB TO READING CLUB

God used a football club and a pandemic to lead Paul Crothers to a local literacy problem. Each week in Recife, Brazil, Paul and his team from the Vale project play football, pray and chat with around 100 boys and young men who don’t have many male role models in their lives.

The pandemic sadly put the football evenings on hold – along with school. As Recife’s lockdown started to lift, Paul visited some of his teenagers and was concerned.

“We saw that many of the teenage boys from our project had had their education badly affected by the school closures. All of these boys attend oversubscribed, underfunded and understaffed schools. Many of them also come from dysfunctional families where education is not always valued, so even before Covid, they were at a disadvantage.”

According to a report from UNICEF, Covid-19 left five million Brazilian children aged 6-17 with no access to education in 2020. “During the pandemic they weren’t going to school for many, many months,” says Paul.

“If the schools ran any online teaching, few of these kids had the equipment to access it. It only widened the gap between our boys and others their age.

“We could see that even their basic reading and writing skills were starting to suffer, and I was disheartened to imagine the struggle they were going to face in life if they didn’t get back on track.”

There was no extra support offered to these teenagers, so Paul and his team decided to step in. They began running a class twice a week for two hours to help the boys catch up and improve their writing skills.

But it wasn’t just the football boys facing this problem – many of the community’s teenage girls were in the same situation. Through the work of Latin Link Strider Suz Rothwell, the Vale team has got to know a lot of local girls who Suz felt also needed help. She encouraged them to come along, and for the past six months, both boys and girls have been learning together.

NEXT UP, THE PARENTS

Running these groups for the local teenagers opened a can of worms for the Vale team. It became clear that many of the young people’s parents had fallen through the cracks of the school system themselves – and that many of them were actually illiterate.

“Many of these adults left school at a very young age – in order to earn money or for other reasons – and they never had a proper opportunity to learn to read and write,” Paul explains. “Others have special educational needs and never received the support they needed. We realised some parents weren’t even able to sign their own name.

“We strongly felt this was an affront to their human dignity. Parents like Maria told us how embarrassed they were about not being able to read; the lengths they had gone to to try and hide it and what a burden their secret was.

“Not only that, illiteracy puts lots of stumbling blocks in their way. These families already live in poverty – and not being able to read creates another barrier to accessing their rights. Some told us they were unable to apply for benefits because they couldn’t understand the forms.”

Seeing their teenage children benefitting from classes suddenly gave these adults a surge of hope that they could learn too. Paul asked what the opportunity would mean to them – they said they wanted to be able to help their children with their schoolwork, to read the Bible, and most of all, they wanted the chance to lose their shame and feel some self-respect.

So now, three evenings per week, a group of parents and other adults from the community gathers to study reading and writing with the Vale team.

“It’s been so positive,” says Paul. “The most obvious impact has been the increase in people’s self-confidence and self-esteem. The adults have been incredibly committed and are determined to make the most of this opportunity. It is clear that they are really proud of the progress they have made so far.”

Paul feels that God led the team to this hidden need in their Recife community. They only needed to respond to see God start to restore the human dignity of whole families who had been left behind and forgotten.

As the Vale team continue to run reading and writing classes for teens and adults, they hope and pray that their students will end up with a brighter future – one with more independence, a chance of a decent job, or simply the ability to come out of hiding and hold their heads up high.

Pray for the resources needed to expand the literacy courses to more people in the community. Pray that those who come will experience God’s love for them, along with a new sense of confidence and better future prospects.

This article was first featured in the autumn 2021 edition of Latinfile. To read the full magazine, click below.