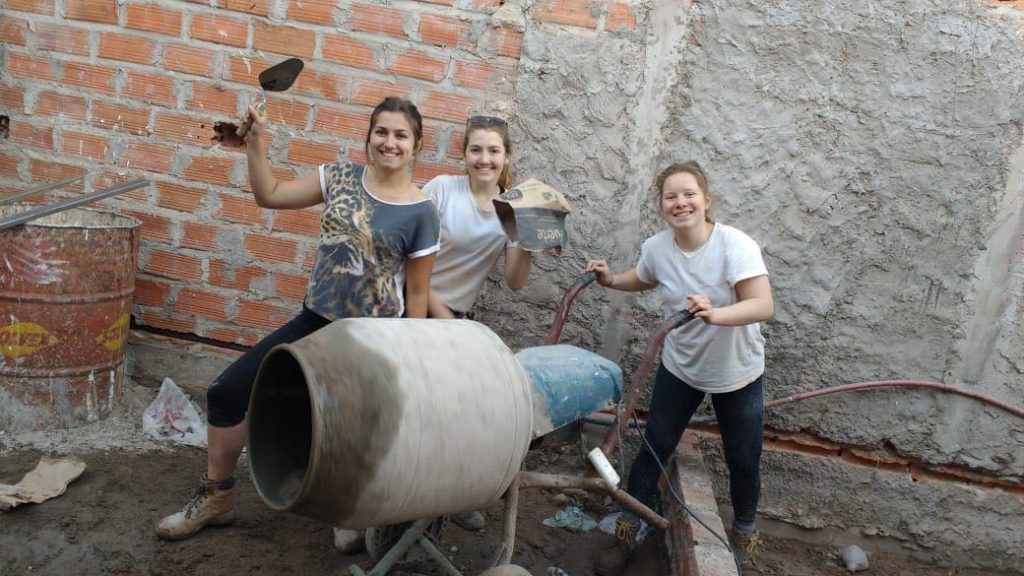 Hello everyone in the UK! We are still having a lovely time here in Tartagal, however we can’t quite believe that we are on our second to last week of our entire project! Time really has flown by and things are not slowing down as it has been yet again another jam packed full week!

After an eventful weekend in Bolivia, the whole team were more than happy to have a day off this Monday. Although a few of us were still not feeling 100%, that didn’t prevent us from heading over to Marco’s house to watch England vs Tunisia in the football! Some of the team were more invested in the game than others… but on the whole we were very happy with the result! However, the game was somewhat interrupted by Marco who persisted to take photos of us during particularly stressful moments. That evening the majority of the team went over to the English institute to talk to the young people there and help them practice their English. This time we split into two groups and each took a short presentation on where we came from which included pictures of where we live in England, Scotland and Northern Ireland. They also treated us to some pizza whilst we continued to chat with them and get to know them a little better. Although we had already eaten at the institute, that didn’t stop us from later getting lomitos and devouring them very quickly!

Tuesday morning, as usual, started with work at 9 o’clock. However, unfortunately morale was a quite low this day as there had been a little bit of confusion with an unexpected delivery of cement and we were also unable to find the equipment we needed for that day. Having said this, we were still able to make good progress, and Adelis, who could see that some of us were a little down, then prayed for us which was really lovely. He then disappeared only to return about 20 minutes later with some chocolate milk and some very tasty smiley-face biscuits, which definitely lifted our spirits. As well as this, Rey, one of the original guys we were working with when we first arrived, came back to work this day having had to have some time off due to a leg injury. This was lovely as we felt as though the team was back together again. Therefore, what began as quite a hard day actually, by the grace of God, turned out to be very productive as we filled half of the largest room with concrete. That evening after we returned from work at about 6:30 we played games as a team and finished off with an episode of Money Heist.

On Wednesday we continued to lay the concrete foundations down and finished the main room of the building. We then began work on the hallways which involved moving any excess rocks and soil from the inside of the building to outside in order to flatten the ground enough for the concrete to be spread evenly.  This was particularly hard as on previous days we had been using the hallway as a base for all our excess materials thus there was quite a lot of moving needed to clear the entire area. However, over the course of the day we managed to fully complete the corridor despite having to mix the cement by hand for the first half as we couldn’t not get the machine to work.

We also were blessed once again with lots of facturas, bought by pastor Juan and Abel! In evening, the whole team, minus Ben and Ellie who were still feeling ill from the weekend, our mid-week service at one of the daughter churches. As Ben was ill and a keyboard was not available in this church, we decided to sing ‘what a beautiful name’ again acapella, which everyone really enjoyed as Hillsong (the artist behind the song) is very well known here in Argentina. We could even see some people in the congregation singing along in Spanish!

The following day Alice and Hannah were on domestic duties and spent the morning cleaning before heading out to a local café and treating themselves to some croissants and cake. Ben and Grace spent the morning filling in the gaps of cement left over from the previous days. We also had a great time with Juan and Victor, who both help us on the work site on a daily basis. They were both very excited for the upcoming Argentina vs Croatia match that afternoon. Everyone in Argentina loves their football, and it was for that reason that we (along with the entire country) had the afternoon off work to watch the match. Therefore, we all went around to Marco’s house for spaghetti and to watch the game. However, the result was not what we were hoping for as Argentina lost 3-0. Marco had to leave the room after the second goal was scored to watch on his own in a different room and only returned until after the match was over. On the walk back to our house we noticed the streets were very quiet and realised that the whole town had gone into mourning. Please pray for Argentina. After the excitement of the day, we spent the evening chilling all watching different things on Netflix in little groups: Mo and Libby watched an episode of Black Mirror; Grace and Ellie caught up on Grey’s Anatomy; and Alice, Ben, Hannah and Nathanael watched Back to the Future part 2! It was a great way to end the day!

On Friday, we worked solidly in the morning continuing with the work from the previous days.  The afternoon, however, was spent preparing for that evening’s children’s work. We sorted through all the shoes we had bought in Bolivia, putting them in size order and also putting a memory verse in each pair, ready to give to the leader/main teacher of the food programme. When we arrived, we did a sketch on the story of Jonah, making good use of the parachute (the sea) and a large painting of a fish that had been given to us by one of the visiting pastors. Nathanael got straight into character and was an amazing Jonah, with Hannah and Morwenna narrating, Ellie Libby and Eleanor made an excellent ship’s crew, Ben was a fabulous whale, and Grace and Alice played the Ninevites. It was a whole group effort! Towards the end of our time there we gave all the shoes to the leader so that she could later give them all out to the kids. We spent the rest of the evening playing football, playing with the kids and getting to know them better.

We worked all of Saturday morning, continuing to concrete the remaining floor and also starting to prepare the porch to be concreted. We also began with the plumbing; digging trenches for the pipes to be put in. Over the course of the morning we listened to the entire Les Misérables soundtrack (extended edition), much to the confusion of Juan, although we did catch him trying to film us at one point, meaning we were either really good… or really bad. We then came home for lunch, where Grace and Eleanor had lovingly prepared pasta and cheese sauce for us all, which really didn’t take long for us to finish! In the afternoon we didn’t go back to the building site, instead we prepared for the church youth service in the evening which we offered to lead. We started with a game of scavenger hunt, which they all got very into, and then after a short time of worship led by Ben and Benjamin from the youth, Hannah and Mo gave a talk on the Lost Son and how our identity is in God alone. We then split off into small groups and talked through three questions we had prepared earlier, and also got a chance to pray with each other, about which of the sons we related to more, and also thing