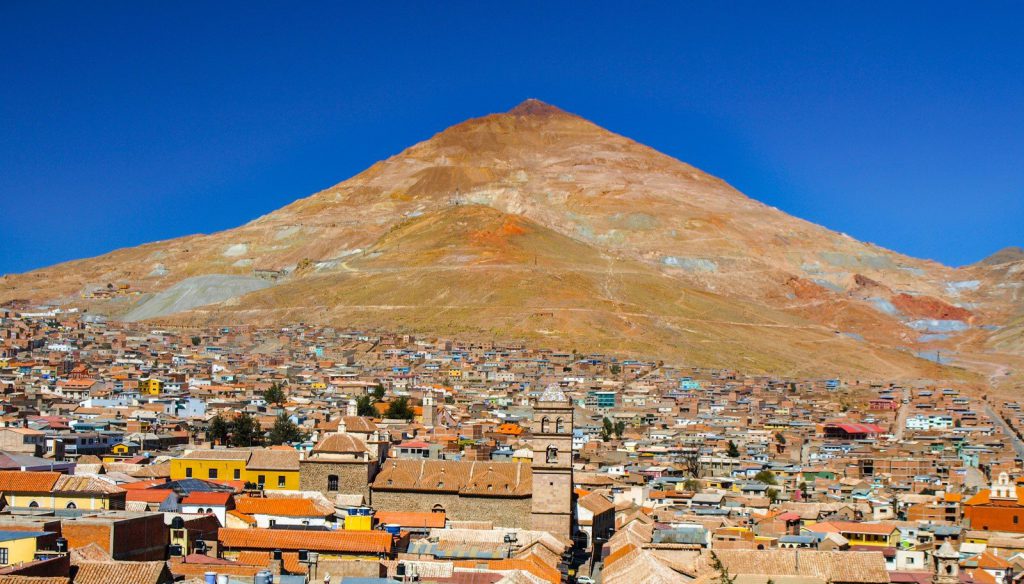 The underground god of Potosí

There’s no easy place to be a mission worker, but Louis and Maribel Woodley face particular challenges. They are bringing the gospel to a mining community which (like others across the Bolivian Altiplano) practices syncretism: combining Catholicism with indigenous Andean practices, including devil worship.

We love Potosí and have worked here for over eight years. At 13,500 feet, it is said to be the world’s highest city and was once one of the richest cities in the world. Potosí’s history and geography revolve around the economy of mining, as Cerro Rico (Rich Mountain) dominates the city’s skyline. This mountain has been a source of silver, copper and tin for over 500 years, but resources have gradually depleted and Potosí is now one of the poorest regions in Bolivia.

The city’s inhabitants are mainly of Quechua decent and although most consider themselves Catholic, traditional Andean religions dominate cultural practice – most notably, in the mines themselves.

It is commonly believed that God rules above the ground, while below is the domain of El Tío (The Uncle), a figure that closely resembles the devil in Christianity. It’s said he is responsible for the supply of minerals, as he mates with La Pachamama (Mother Earth) to produce them. If he is worshipped, they say, the mountain will produce. If he’s neglected, miners will die.

Over the centuries, hundreds of thousands have died working in the mines and although this is due to highly perilous working conditions, the miners blame El Tío. Consequently Cerro Rico has a reputation as ‘the mountain that eats men’ and El Tío is worshipped to appease him.

There are around 500 mines and at the entrance to each one is a statue of El Tío. The miners present daily offerings of cigarettes, coca leaves, and alcohol. Llama foetuses are offered too and, in some cases, aborted human ones. There are also regular sacrifices of adult llamas, their hearts removed still beating, and their blood smeared around mine entrances in the hope that El Tío’s bloodlust will be satisfied. After this sacrifice, the rest of the animal is eaten in celebration.

The challenge of syncretism

In this context, there are huge difficulties in presenting Christianity as an exclusive set of beliefs. There is a real belief in the power of El Tío and La Pachamama, and people don’t generally recognise a contradiction in worshipping both them and God.

During our time here, we have seen the evangelical church in Potosí grow. However, it remains deeply divided by denominationalism. The miners themselves remain largely unreached, with very few coming to accept Jesus.

The Christian miners that do exist are often blamed for accidents, or the mountain’s declining yields, as they refuse to worship El Tío. Thankfully, levels of Christian persecution are not what they once were. But the spiritual oppression remains tangible, as you might expect in a place where the devil has been worshipped for 500 years.

Officially, the government defines Andean beliefs as culture, rather than religion, and with the active promotion of the Andean worldview in schools, these beliefs and practices are on the increase. Christian teachers are often forced to teach this view or take part in activities that clash with their own beliefs.

God is at work!

Nevertheless, despite the challenges, God is on the move in Potosí. Because of the high levels of spirituality in the culture, people are open to Christian beliefs in way that they might not be in some western cultures. So our mission challenge is to guide them through the religious noise, towards a truly biblical understanding of Jesus.

It’s commonplace for people to see the Bible as just one of many truths on offer in the spiritual marketplace, turning to any-and-all deities for protection, prosperity and the like. Therefore, we see much of our mission as teaching people that Jesus is above all else and the Holy Spirit has real power to transform their lives and give them hope.

Steering people towards truth is crucial, but from our experience, it cannot be done without relationship. We can’t expect people to hear the gospel and be transformed immediately. It’s a process that we have to be prepared to journey through with them. And the hope is always that our way of life would serve as a testimony to the communities of God’s grace and love.

In one ministry called The Conquerors, Maribel works alongside widows of miners, some of whom have been told that their husband’s death was the punishment of El Tio. Being able to support these women through their grief, and share the hope-filled message of Jesus, is a joy and privilege.

Could you help bring the good news to Potosí? Check out our Stride placements here or email stride@latinlink.org.uk