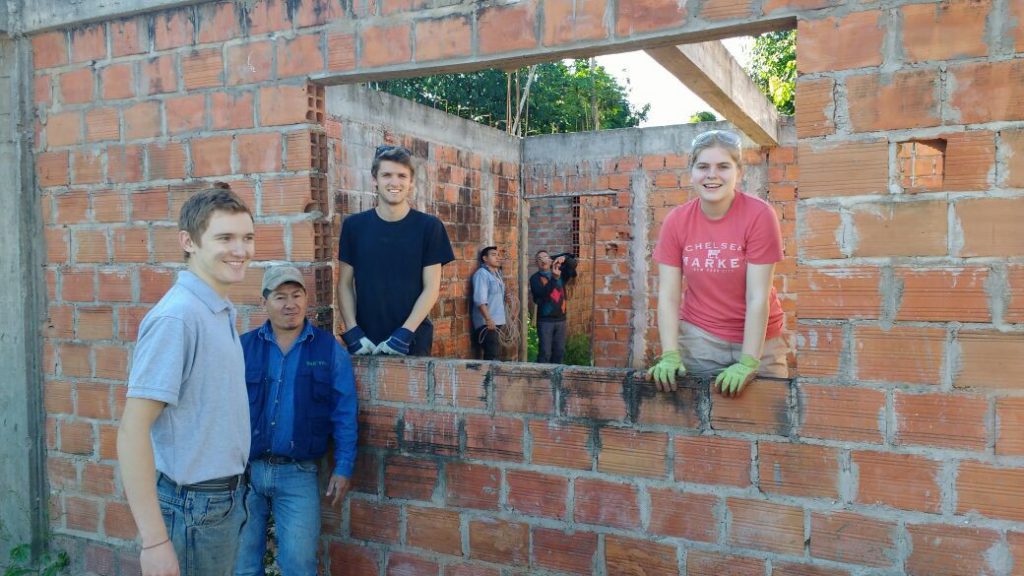 Hola again from Tartagal! We’ve had a very busy 2 weeks in the north of Argentina with lots of building, church services and meeting new people! We all feel incredibly blessed to be here and are continuing to learn more about the culture and the people as we try and make the most out of the time we have left to serve God in this country.

Monday, Tuesday, Wednesday and Thursday were our first days of work on the building site yet in Argentina! On this project it just so happened that the most physically difficult work would come at the beginning of our 7 weeks. This involved levelling out the ground of the entire site and removing excess dirt in wheelbarrows to the outside of the church. On both Tuesday and Wednesday, we also pulled down a total of three walls using pick axes, hammer and our hands! This was in order to create a safer environment and more space to work in; creating the concrete and steel structures for the new walls and floor. We also had to breakdown the remainder of the fallen walls with pick-axes, of which Ben managed to break two. We arrive every day to the building site at about 9 and finish at around 12:30 for lunch before returning at 2:30 and then finishing for the day at 6. Most day of that week we were joined by Facundo, one of the guys from the youth at the church who also works with us on the project, for lunch and have really enjoyed getting to know him and hearing his testimony! He is currently training to be a pastor in the church and has been really helpful in teaching us some Argentinian worship songs that we can join in with during the church services! On Thursday after we had finished working we all came together for a football match in one of the rooms of the building site. Although we did initially suggest England verses Argentina, we soon realised that we would have no chance and instead decided to split the teams evenly. This was a really awesome way the bond with the people we were working with and chill out after a hard days working.

Friday was a very exciting day! Not only was it an Argentinian national holiday (celebrating their independence) which meant everyone took the day off work, it was also Nathanael’s 18th birthday! The night before, after Nathanael had gone to bed, the team stayed up to decorate the house with balloons and banners! That morning we all ate porridge (Nathanael’s favourite breakfast) and watched him open his present and his cards from the team and his family and friends back home. At mid-day the whole group headed off to the Plaza (centre of town) to join in the Argentinian celebrations with Pastor Juan, his family and the entire population of Tartagal. We spent to afternoon watching traditional Argentine dances and wandering round the various market stalls and as it was a beautifully sunny day, along with 3 guys from the youth group, we all got ice cream! However the celebrations did not stop there as in the evening we were invited to the church for Nathanael’s birthday party! They made it a really special evening with lots of games, decorations, food and even a cake made by a baker who goes to the church! We sang happy birthday both in Spanish and English and were also able to learn about some birthday traditions here in Argentina. One of which was the fact that the cake is worn rather than eaten, as after Nathanael had finished blowing out his candles, a very messy cake fight ensued meaning that not a lot of it was actually tasted.

Sunday morning began with a great devotional led by Hannah and Libby on the amazing gift of prayer in which we were reminded of God’s faithfulness and the blessing that it is to have a personal relationship with him! The team then headed off to Marco’s house where we had spaghetti bolognese for lunch with his family. Following this, we spent the afternoon at a field just outside of the feeding programme where about 60/70 youth from both church and the local area were gathered playing football. Although our football skills were not all that impressive it was an amazing afternoon during which we had some great conversations with people our age and built up lots of new relationships! That evening as usual we all went to church at 8:30. During the service, Libby shared her testimony amazingly well and we all sang ‘what beautiful name’! As usual it was a very tiring day and at 11:30 when we arrived back to our house the entire team was shattered!

Monday 28th May was as usual the team’s rest day and was spent predominantly going through the Freedom In Christ bible study that we have been doing together over the past 3 months. That week’s session was entitled ‘healing negative emotions’ and as was expected was a real help to all of us and provided a lot of food for thought whilst also sparking a lot of conversations throughout the week on what the difference is between feelings, emotions and attitudes. Later on that day, Mo, Ellie and Eleanor joined Marco (our coordinator in Tartagal) at an intense aerobic exercise class. Although this was hard work, it was really fun and a great way to meet new people in the community and build relationships whilst also improving our Spanish!

Tuesday and Wednesday that week were the hottest yet even by Argentinian standards! Although it was not particularly sunny, the humidity made working conditions less than ideal. Having said this, building work still progressed and the team were able to dig the trenches in which the foundations for the new walls would be laid. During these two days we also had lots of visitors from the church who brought us bread, cakes and lots of ‘mate’! We were able to really get to know people better talk to them about why we wanted to come to South America. We’ve also had great opportunities to hear people’s testimonies and share our own in between working. However, our relationships have not just been in the church as we have also been able to talk to people on the streets and in the shops we go to almost every day. As none of us look particularly Argentinian people are keen to talk to us and ask where we are from. This is a great blessing as it means we are able to talk about the church and invite them along to services! For example, on Tuesday evening Alice and Mo visited Lis, a lady who works in a local shoe shop, and talk to her for around an hour about her work, her upcoming exams and her wedding in September. They were also able to pray with her and hope to go back some time this week.

Wednesday evening was spent at a service held at one of the daughter churches near to the rehabilitation centre for young men struggling with addiction. During the service we sang ‘Blessed be the name’ and Libby shared her testimony. After the service we all went to the rehab centre and joined the youth there for pizza that they had made for us earlier that day. We have felt extremely blessed by their generosity and hope that we can have more involvement with them in the future.

On Thursday the temperature suddenly dropped which made work a lot easier! For the whole of that day and following day wor