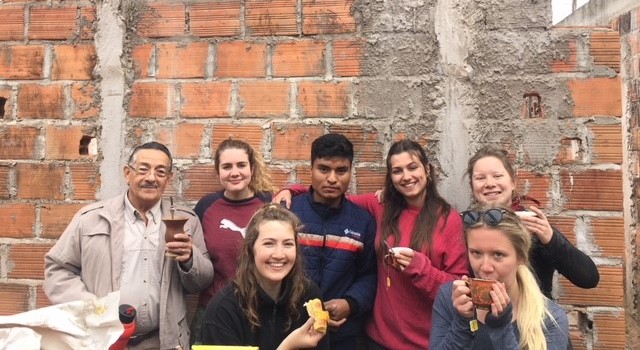 Hola!! Yet again we have had another very busy and eventful week here in Argentina, including the official birthday of Tartagal, the start of the World Cup and, to finish things off, a quick trip up to Bolivia for the weekend! Although we have less than two weeks to go until we say goodbye to the church and people here, we are still learning more and more about the culture and how we can continue to serve as much as we can.

After the excitement of the Sunday before, on Monday we had a day off. The week began with an intense session of Freedom in Christ (the bible study we as a team have been going through on a weekly basis) which took us from 10:00 in the morning to around 4:30 in the afternoon! Although it was long, as a team we found it really beneficial and have enjoyed learning more about the bible together through these times. That evening Eleanor and Mo joined Marco for an exercise class which they again said was really fun but physically exhausting. The next day however we were all back at work as we continued to lay down the foundations of the floor with concrete. That day we managed to complete two rooms with the help of some very kind and dedicated members of the congregation.

On Wednesday, the entire population of Tartagal had the day off work to celebrate the town’s official 94th birthday! The celebration comprised mainly of a loud and colourful parade celebrating all the schools, universities, military veterans and professions in the town. For around an hour, we stood in the sun and watched on as hundreds of people, young and old, danced, rode horses and marched down the street in traditional clothing. Marco then organised for us to enjoy a lovely lunch of hot dogs (choripan), empanadas and strawberries and cream (very cultural) for dessert. As we ate, a local band performed on stage, while children performed more traditional dances, which they taught us after lunch.

Keen to show off the new dance moves they have learnt since arriving in South America, Grace, Mo, Alice and Ellie grabbed two enthusiastic looking Argentinians from the crowd and began to dance along to the band! That evening Ellie shared her testimony, which was followed by two English songs. That night, some of us headed to the plaza intending to continue in the birthday celebrations. Unfortunately, we were disappointed to discover a silent and empty square, but so as not to waste the trip, we found a local pizzeria, sat outside and celebrated in style by eating until we couldn’t eat any more.

Work recommenced on a bright and sunny Thursday morning, which involved making a start on concreting the main room of the building. This draining work continued after lunch and lasted right through to six o’clock, by which time we successfully managed to concrete half of the largest room. Friday was a slightly different day in which everyone bar those on domestics worked in the morning concreting the main room. Following lunch, the team split into two groups comprising of those finishing concreting the big room (Grace, Ellie, Nathanael and Libby) and those participating in children’s work at the campo (Mo, Alice, Hannah, Eleanor). The children’s work provided us with a brilliant opportunity to speak more purposefully to the leaders of the Feeding Programme in order to find out more information about the children and their particular needs. We found that there is a demand for appropriate, warm winter shoes to keep the children from getting very cold during these months. As well as this, the team were able to share the story of the lost sheep and how God is like the good Shepherd who searched high and low just to find one of his lost sheep, whilst also being able to learn a new song called ‘El Amor De Dios Es Marvilloso’ which most of the children already new and were able to join in with!

The weekend began with the team finishing the Freedom in Christ session we had started on Monday before packing for our upcoming trip to Bolivia! As we are so far north, it only takes an hour bus journey to reach the border and as a result it is common for locals to head up to Bolivia for the day to take advantage of the significantly cheaper prices and greater variety of merchandises available. This meant that shortly after passing through the border we saw three other families from the church in Tartagal! As a team we also took advantage of the cheaper prices and went that evening with Marco to buy shoes for the children at the feeding program. After an extensive search we eventually bought 48 pairs of trainers which we are very excited to give to them next time we see them!  That evening we joined the church’s young people for a youth service during which we sang What a Beautiful Name and did a small presentation on who we are, where we come from and why we are here in South America. Mo also explained about the amazing gift that is God’s grace to us and how it has the power to change lives.

However, our time in Bolivia did not go quite as according to plan as 5 out of the 9 of us that night became ill and as a result the whole team got very little sleep due to numerous trips to the bathroom.  The whole experience however, would have been a lot harder had Grace (who was not ill) not have spent the entire night cleaning the toilets and comforting and caring all those who were sick. The rest of the team are all extremely grateful for selfless attitude and the compassion and patience she showed that night. It wasn’t surprising therefore that the next day we were all feeling very tired and run down. This meant that unfortunately we had to spent the whole of the day in bed, meaning we missed the kids service that we had planned to lead, and only Alice, Eleanor, Grace and Libby made it to the evening church service. Although, because we were actually staying in the church building it meant that those who were ill were able to sit up in the balcony (where they could be wrapped up in blankets and were close to the toilets) and watch whilst the others sang the song open the eyes of my heart and Alice shared her testimony. Before heading home to Argentina, those who felt up to it spent the remainder of the evening eating pizza with the pastor, his wife and his children.

Although our trip to Bolivia felt like a bit of a rollercoaster, we still all know that what happened was a part of God’s plan and that we were still able to be with and serve the church there in the time that we spent with them. We actually did enjoy the experience and have definitely got closer as a team (if that was even possible after nearly 4 months); plus, we now have a lot of new, unique, memories that we will never forget!

Again, thank you so much for all of your continued interest and prayers about what we are doing here in Argentina. As a team we feel truly blessed to be receiving such amazing support!

If you could please pray for:

And praise God for…