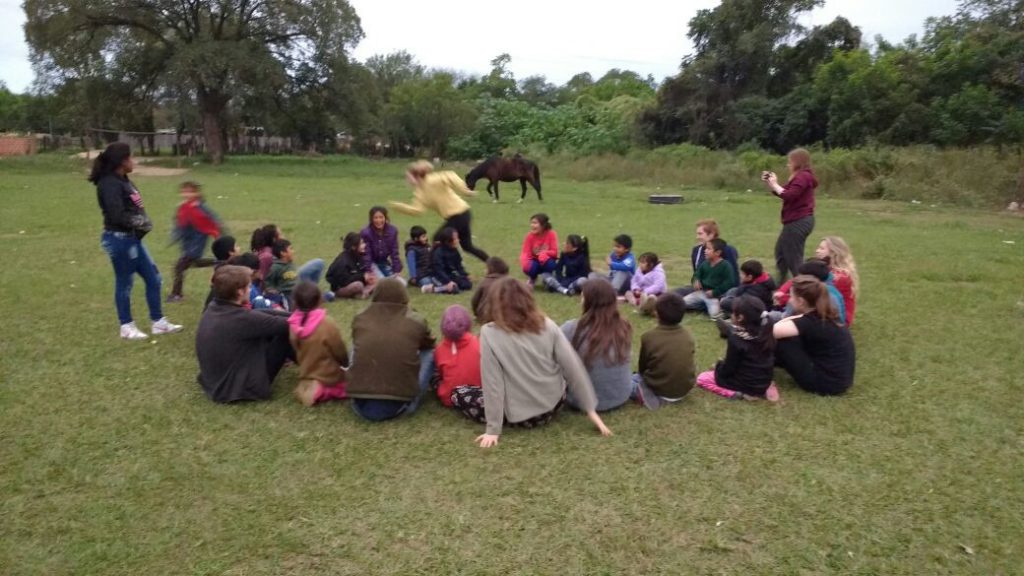 Buen dia from Tartagal!! Hope you are all doing well in the UK and are looking forward to the World Cup as much as we are ??

We’ve had another cracking week here in Tartagal, full swing into life and the project here.

On Monday, our day off, we continued with the ‘Freedom in Christ’ course in which we learnt about forgiving from the heart, which actually many Christians still struggle with even though it is such a big part of our faith. This took up most of the day but in the evening Grace, Ben, Alice, Nathanael and Eleanor were able to help out at the English institute with their class of teenagers which was lots of fun! They were asked many questions about where they come from, what they will study, and even more personal questions such as ‘Do you have a boyfriend/girlfriend?’ which seems to be a favourite question to ask here. After getting home we then treated ourselves to Lomitos for dinner, those delicious Argentinian meat sandwiches, during which we were reunited with Dani, Priscilla and Rebi (Priscilla’s daughter) who came to say hello, our in country Step team coordinators. It was SO lovely to see them again and we had a great time catching up with them over tasty brownies that Rebi had kindly made for us.

On Tuesday our week of work started with moving 1000 bricks into the building site in rows which would be used for making walls between each room of the building. Then we spent the rest of the morning with some people making cement, some shovelling into buckets and transporting it to where the walls would be built and then others bricklaying. Then we went home to a delicious lunch of 18 burgers (!!!) made by Alice and Nathanael who were on domestic duties that day. Dani and Priscilla joined us afterwards and we had a great discussion about how the project is going, and they taught us more about church culture and the difference in denominations here in Argentina. After building more walls in the afternoon, we returned back home and then managed to persuade most of the team to go on a run…certain members of the team have great skills of persuasion! We met a fellow exerciser in the park who is a doctor from Buenos Aires and had a good chat with him in English! People here are very interested in who we are and what we are doing here as there aren’t many non-Argentinians here in Tartagal, which is a great way of telling people about our project.

Wednesday at work was quite a long morning as we mixed more cement to make walls and pillars. However, Pastor Juan came yet again with tea, Mate, and pastries (‘Facturas’) which is such a blessing! Dani and Priscilla joined us for Quiche and jam tarts for lunch, made by Eleanor and Ben which was great. Then we had another meeting where we were able to ask lots of questions and they gave such good advice to us. Although we returned to work slightly late, it was great to receive the advice they gave us and information on how best we can bless the people here and understand more about cultural differences.  In the evening we went to another daughter church which was really fun and lively and was actually being recorded live for local radio! When we went to the front, Ben shared his testimony superbly in Spanish, and we sang ‘10000 reasons’. Dani preached really well on how we should receive God like a child and the importance on how we should value children in general. The congregation were super lovely to us and even gave us a beautiful gift each, expressing how grateful they were that we visited. They then all prayed for us and we were really touched by their kindness! Then we had yet more delicious pastries and went home.

On Thursday, after a quick chat with Dani and Priscilla after breakfast, we returned to work where Nathanael worked on the walls whilst the rest of the team cleared and levelled out the floors of the rooms in preparation for the concrete floors that would be laid. After an amazing Shepherd’s pie made by Hannah and Ellie, Alice was able to talk to Priscilla about children’s work in Argentina, and Eleanor was able to sort out finances with Dani. Then after the others returned to work, Alice and Grace went to buy more materials for the building site with Dani and Priscilla where they listened to their amazing stories of travelling together in the past! In the evening we went to Dani’s mum’s house for pizza as our last meal with Dani and Priscilla before they left in the morning. We were so happy and blessed to spend so much time with them that week and really grateful for all the help and advice they gave us.

On Friday we made more cement for walls and columns with our friends Martin and Facundo who are young people from the church who come to help on the building site. We really love working with them and the other man Juan who leads us on the site day to day. We left work early at 4 to prepare for the kid’s work we would do at 5 at the feeding programme. It was great fun as usual, and the kids were super excited to see us – one of the most adorable things in the world is the way they crowd around the car and bang on the doors as we arrive!! We played games with the parachute and acted out ‘Jesus calming the storm’. Then we sang some songs with them and after their tea we played stuck in the mud and duck duck goose/pato pato ganso (a crowd favourite). We had great conversations with the kids about who God is with some hilarious answers, and played football with a little girl who is so good that she put us all to shame – a reoccurrence throughout our whole trip – being put to shame by South Americans playing football!!

On Saturday morning we filled half of the main hall room floor with concrete. It was particularly hard that morning as we were really tired. However, when we were really hungry a kind man from the church turned up and brought us delicious hot empanadas! It was such a gift from God that we needed at that moment and kept us going – so kind! Then, funnily, after work we shared even more empanadas with Adelid, his two sons who brought them, and Juan who we work with.

On Sunday we had a lovely lie in and then went to an asado (barbeque!) at the house of a family from the church. Their house was by a military ground where Marco and Noli got married. The food was delicious and the family, which included the lovely young people Malu, Ivan, and Romina, were hospitable and made us feel welcome. It was a hot and sunny day, and afterwards we walked to ‘el Paseo’, the green stretch where we do our running, and we met lots of the youth and people from the church where they were playing sports; it was such a nice atmosphere. Whilst Hannah and Eleanor got to know some of the youth better over Mate, the rest of us played volleyball with some of the people we had played with in previous weeks –dispersed into groups of three where we played winner team stays on. On the basketball court next to us there were lots of school kids playing drums and tambourines, who ended up coming over to us and inevitably crowding around Alice, who in true Alice-style won all their attention, hearts, and then proceeded to tell them about the gospel.

On the way home we walked with Abel and Alan, two of