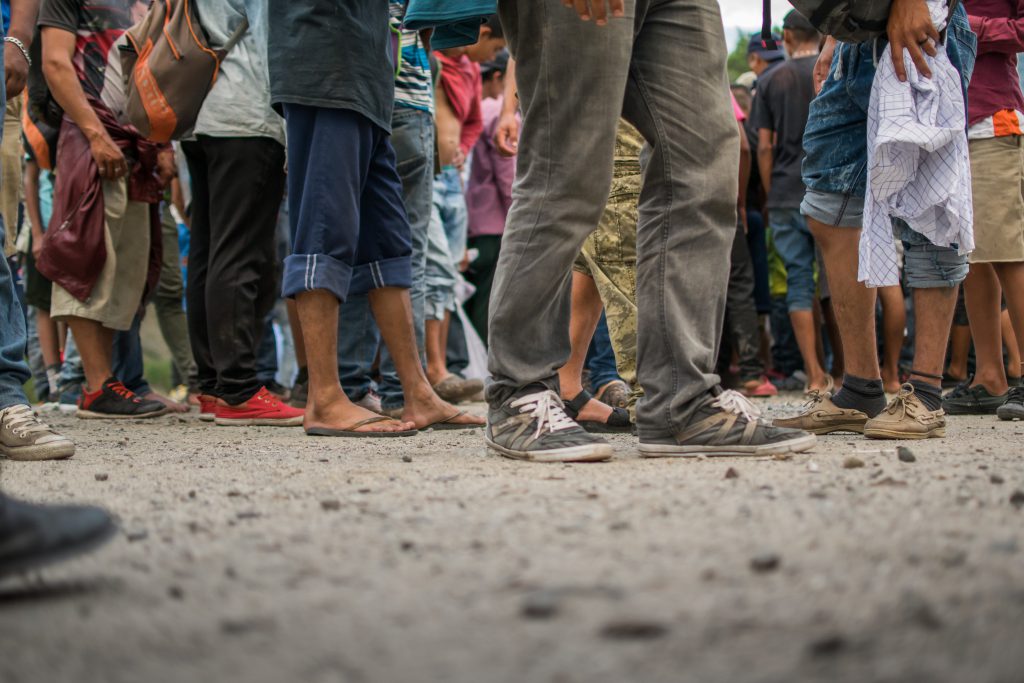 On the Move: Migration is changing communities, cultures and lives

A huge 3.5% of the world’s people now live in a different country to the one they were born in*, and the United Nations expects this number to rise. While many are refugees fleeing violence, unstable countries or persecution, others cross borders to join their families, to study or work, or to gain better opportunities for their children.

What does this have to do with us? For those of us looking to share God’s love across cultures, migration can open doors.

We see individuals from ‘unreached people groups’ coming to countries with a strong Christian presence, where they can hear about Jesus for the first time. We see Christians migrating to countries which would be closed to formal mission workers, taking the gospel with them. God uses these situations to reach people who haven’t had the chance to hear about him before.

Where people have made the tough decision to leave everything and move to a strange land for the sake of their families, Christians can be on hand to provide a welcome, friendship and help where we can.

In Europe, we’re probably most aware of the number of refugees fleeing Syria, but Latin America is dealing with a crisis on a similar scale: a huge exodus of people from Venezuela. Since the economy began to collapse in 2016 and simple items like clothes, medicines and even food became increasingly unaffordable, an estimated 4.5 million people have fled Venezuela – over 15% of the population.

About 1.5 million of these have migrated to neighbouring Colombia, and the UN expects another million to follow them by the end of this year.

Suzanne Potter recently met Rebecca, a Venezuelan who moved to Colombia, and heard her story first hand. It’s a personal story of hardship and hope, and God working in the midst of it all.

There’s a lady volunteering at the community comedor in San Nicolás, on the outskirts of Bogotá. She serves up lunch for the children who come to the clubs, and helps them with their homework. She clearly loves being around the kids and is bright and cheerful with them. Her name is Rebecca.

I heard about Rebecca from a recent Strider who worked here – Anisa Marsh. She told me: “Despite having experienced so many painful things, Rebecca comes to the comedor every single day, making everyone around her laugh with her endless humour.”

And sure enough, here she is. She seems so integral to this community project that it’s a surprise to learn Rebecca has only lived here for five months. When the neighbourhood kids have all gone home, I ask if she’ll tell me her story.

Born and raised in Venezuela, Rebecca and her husband ran thriving small businesses – she cooked school dinners and her husband repaired electrical items. But, as the economy began  to crash in 2016, both their businesses seriously struggled. As the country became more unstable, life got harder, with everyday items becoming unaffordable and scarce.

Holding back tears, Rebecca tells me how, when her father died, the hospital sent his body back to her house – resources were so few that there was nothing to bury him in.  “It was hard,” she tells me, with immense understatement.

But, like so many Venezuelans, Rebecca didn’t want to leave her home and family. Her husband had permission to work in Colombia and decided to give it a try. When he got there, he was fortunate to find a job and a place to live, and encouraged Rebecca to join him with the children.

“It took a lot to make the decision to leave,” she says. But after living for a month with barely any food and seeing her children getting ill, she finally felt she had no other choice. She would take her two youngest children, and leave the eldest with her mother.

Rebecca remembers trying to decide what to bring. “Only take the essentials,” people told her, but she needed clothes for the children, food for the journey… She attempted to pack their lives into a bag. She says she was lucky to be able to take the bus instead of walking miles to the border. Even so, the journey took three days.

Arriving in Colombia for the first time, Rebecca was homesick. She missed her wider family and everything familiar. But she felt she had made the right decision.

“I was so surprised by the price of food! Everything is so cheap here compared to Venezuela,” she says. “We hadn’t been able to afford a Coca-Cola for two years! We had only been eating beans and potatoes.” At this point, her 10 year-old son suddenly interrupts: “Biscuits!” It had been unthinkable to buy biscuits in Venezuela.

Rebecca talks with pride about her children doing well and enjoying school, and of finally being able to feed them well. But their life looks very different now. From having his own electronics business, her husband now travels for two or three hours to get to his job on a road construction project, where he turns the stop/go sign for ten hours a day.

Rebecca hasn’t found paid work yet. San Nicolás, where they have ended up, is a poor district on the outskirts of Bogotá, where people use drugs openly in the park – that didn’t happen where they lived in Venezuela.

The homesickness hasn’t worn off. But in everything, she’s putting her children’s needs first. “For me, I want to go back home, but it’s more important to be able to feed my children.”

Being an immigrant can be hard. The huge number of people migrating from Venezuela has stirred up negative attitudes in parts o