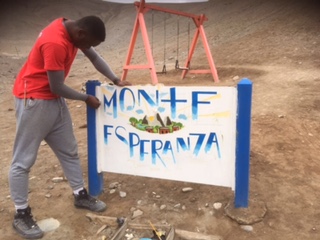 It is Friday night. The moon is out full, but with the appearance of a half moon, as the top part is obscured in some clouds over mountains. It is almost the first time we have seen the moon. There are a few stars in the southern sky, none of which I can name. Cicadas are singing loudly, content. The town is quiet, yellow dots of street lights illuminate the desert darkness. There is a fire burning a couple of lots away. A black dog hovers at the entrance to our land, uncertain whether to enter or not. He usually does. The bird they call a ‘Tero’ starts to sing its plaintive song, and there is the echoing of dogs barking around the village.

It was our last night, so it was only right that the stars came out, as it was right that for the first time the sun shone through the window next morning for breakfast. Usually I open the green curtain around 7am to see which sort of grey the day will bring, wet grey or dry grey or grey that gives way to sunshine. On the last morning it was glorious sunshine. It was perhaps appropriate, too, that on the last night the tin roof rattled for a short while in the early hours, with an earth tremor, maybe as a reminder of the fragile balance of life in this area.

For our last morning, Turi the neighbour climbed the bamboo fence to say goodbye while we breakfasted, and in his deep mountain accent thanked us for working with his three girls and his wife. They also came later for final hugs, as did Lorenzo and his sisters, Sareeta and Valeria. For Lorenzo I tried to say something meaningful about his coming years. As usual he seemed to half listen. One or two others came before we left, in particular Yamelie, who had almost been part of our team.

Our final act was a photograph of the whole team, our group of Steppers from London and the Lopez family. Fitting too that the photograph was next to the completed sign, that Pablo and Chike had laboured over with their artistic skills. Both in their twenties, Pablo in ministry with Vida Nueva, Chike from England, and working together in symbolic partnership. ‘Monte Esperanza’ in bold lettering can be seen from a distance.

Other tasks were completed in the last week. The wobbly bridge on the playground was restored, a coat of paint was put on all the tables made by the last group, and to the steel doors of the comedor. The last steel columns were finished in anticipation that Juan Carlos will have the professional help he hopes for to get the concrete supports going, and for which we have been able to leave some money.

As well as the expected activities with children and adults, there were surprises, too – of course.

On Thursday the ladies of the church combined together around the huge cooking pot, and made sopa seca, which we enjoyed with several as a community meal. On Thursday, too, while playing parachute games with the children, a large car drew up, and out came several suited men, all from local government departments to see the developing work. All the children were gathered onto the roof, where we had been working, and each of the visitors said a few words, including compliments about our support of the work, and commended the ministry for its social and especially spiritual influence in the community. On Friday, our last day, there were some home visits, final jobs, and a youth meeting in the evening.

We are tired. Some have been under the weather. We are exhilarated. We have seen and learned and received so much. Our leaving is defined by physical separation, but the connection is real, and please God will continue.

Isaiah 40.29,31: ‘He strengthens those who are weak and tired. And those who trust in the Lord will renew their strength. They will rise up on wings like eagles. They will run and not grow weary. They will walk and not.’