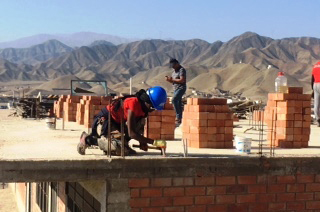 Our week in La Florida

“…Do not fear, for I have redeemed you; I have summoned you by name; you are mine.” Isaiah 43:1. This passage initiated our time and work in La Florida. Yesterday, at the team’s orientation we discussed our anxieties and difficulties we potentially may face but we were reminded that we are here for the same purpose; to serve our God and his community here, in La Florida, and the Lord has brought us here and is doing a great work.

Our first full day was busy; we accompanied Pablo, Juan Carlos and Kelly’s son, to a neighbouring district, El Desierto. Here we played with the young children and encouraged them with song and dance to invite God into their hearts and in doing so, we hoped to encourage them to bring along their friends and families to the church. Later we joined a jovenes meeting. A meeting for slightly older children and young adults where we played games with them and were introduced to many more children who are growing in Christ and who Pablo and Juan Carlos hope God will choose to carry out his mission and build up more communities around Peru. We sang songs and danced and played team games. The team managed to get along very well with the children of the community and we were all able to communicate, even without language, which was a blessing. It was exhausting yet fulfilling.

We read about salt and the light (Matt. 5:13-16), and about how we have come to serve and to show our faith to this community. We recognise the service of Juan Carlos, Kelly and Pablo and how our team will impact the church here. We are also aware that these children will impact us; we are guaranteed to leave with a different perspective on life, with a passion for servant hood, being the salt and light both in Peru and in England.

We began a practical day of unloading bricks and cement, sawing steel girders and de rusting steel. Juan Carlos dedicated the project and the work to God, something that was really inspiring; it is not often you will see people praying over a building site in London. He thanked our Churches for the partnership, especially STWSS for the ongoing 9 years that we have been involved. Members of the team prayed in Spanish and in English, and we dedicated our work to God, asking him for strength and perseverance for the building work. It was amazing to see Juan Carlos’ passion, patience and how expectant he was for the work, and how he said it was all in God’s timing, that we had arrived and how we were a blessing from God. There was a strong sense of being involved in bringing God’s kingdom to earth.

The evening service began quite slowly with only one man sitting in the church a huge while after the original service time- There was a compulsory town meeting where usual attendees were kept hostage (or very occupied)- We played games with the Jovenes, the young members of the church, until finally more members came in trickles and we began the service with a couple of songs, a self-introduction of the team then a drama on Pedro and co (Peter, Simon etc). The drama centred on them being called to be a fisher of men. Robert followed with a talk and testimony touching on our undeserved help from God. Other members of the team spoke in the service including Anna who gave a brief testimony and Juliana who lead a bubbly memory verse session. The service culminated with more songs and of course, more games.

During the day a crowd of about 40 kids joined us for a chaotic round of sports, skipping and shouting (in joy and happiness obviously). Soon after we ushered them to the comedor for arts and crafts and memory verses. Acts 16:31- Believe in Senor Jesus and obtain “la salvacion”.

We began by thinking about it what it means to be a child of God, and what it means to be loved by him. This week will concentrate on building work on the roof.  We divided into groups to cut metal rods, bend them into squares, and then attach them with wire to make the upright columns at strategic points where there were already the emerging stumps of columns from the ground floor. By the end of the day seven columns were in place. Juan Carlos said it was a dream coming true. He wants the building to be part of the community, and said that when he went to the council offices and the authorities were very pleased with what the church was doing for the children. Most parents go to the Catholic Church, but their children ask to come to Vida Nueva. Their prayer is that through the children the parents will start to come too.

White lines were marked out up the road near the church.  Hopefully soon this area will have piped water and sewerage before too long!

Our devotion was centred on the blessings that are apparent in both our physical and spiritual lives. Today our practical work included finishing the columns we had been constructing the night before and beginning to lay the first bricks for the wall. We are building an extension to the first floor of the comedor. Towards the end of the day we took some time as a group to plan for the children’s work and the church bible study which would incorporate songs, arts and crafts, games and drama during its duration. We ended our evening with an intimate bible study with Juan Carlos and his family.

Please do continue to pray we, and the project here, appreciate it!