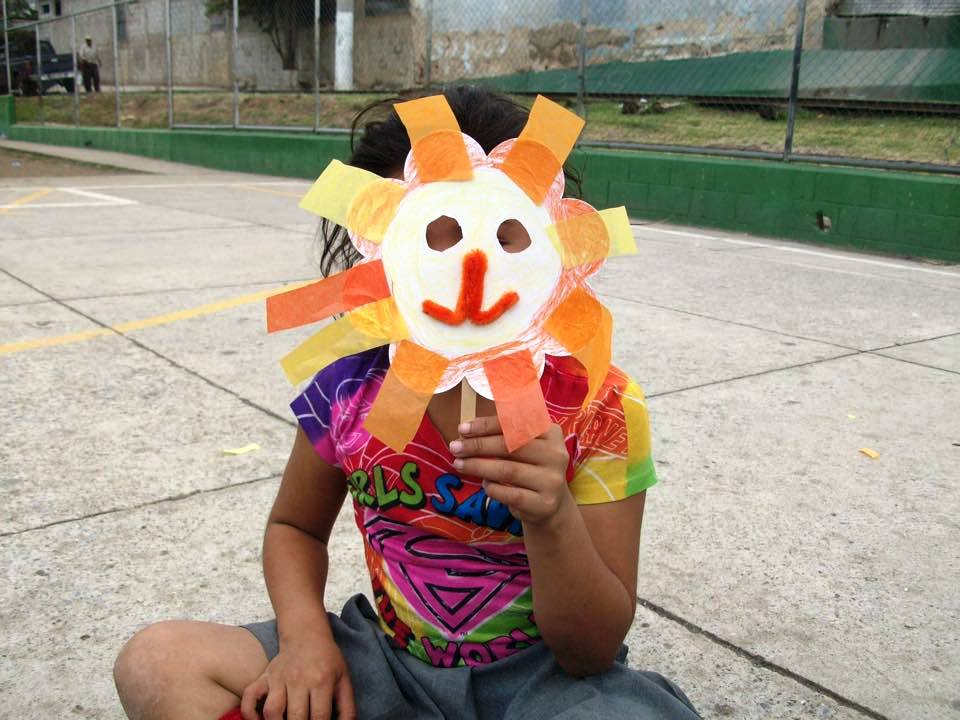 The five of us travelling from Nicaragua to Guatemala had finished one step team and were at the start of a whole new adventure. We left at 3am in darkness and arrived in sunshine with the green hills of Guatemala City making a warm welcome as we landed.

I was still in a daze when I found Mel and Tori in the ladies’ at Heathrow’s Terminal 2.  We quickly found Nikkita and Mollie, both with hefty backpacks as well. Now that the five of us coming straight from the UK were together, we began the long journey through check-in and security. Before boarding our flights, we had high expectations of watching the latest film releases, instead we had 7 hours’ worth of Cheaper by the Dozen reruns! When we arrived at Newark, it was like déja vu – having to collect our bags, check-in and go through security again, only this time we didn’t have the British politeness!

Suzanne (our short term coordinator here) greeted us at the airport with a Latin Link sign – I know I for one felt like a minor celebrity. The taxi ride to the house showed all the colours of this vibrant city and the fast pace at which it moves – it turns out that is very fast!

The house we’re staying in is hosted by two immensely generous people (Jacko and Jomara), and they gave us a helpful introduction when us weary travellers arrived. The lapse of time between our arrival and the other 5 from England really did feel like the calm before the storm, but it wouldn’t be long before we were all reunited as a complete team.

Half of us were napping when they arrived so the hugs were overzealous and the hellos unnaturally high-pitched but to see the girls was a real joy (even though they were jet lagged and sleepy)!

After hours of travelling, we finally touched down in Guatemala around 21:30 – ¡Gloria a Dios! We were met by Suzanne, our Step Coordinator, and got in taxis to head to the house we’ll be staying in with for the duration of our stay in Guatemala City. It was hard to take in much of our surroundings on the way, due to the loudness of our stomachs crying out for food, however, we could clearly see the strong influences from the US: from the yellow school buses to the massive billboard adverts. Arriving at the house, we met Jomara and Isaac, the lovely couple we’d be staying with and we were also reunited with the other half of our team who had come from another Step mission in Nicaragua.

Saturday was a slow, sleepy day as half of us were jet lagged and the other half disorientated and tired from three weeks of mixing cement! Most of it was spent waiting for the rain to stop – who knew? A big food shop ensued as we have to cater for 10 people and somehow we survived (even with our broken Spanish). Nikkita and Sarah O got approached by an extremely friendly woman in the supermarket asking for their social media. It’s clear to say that they didn’t give it to her and let her down with apologetic hand gestures and shakes of the head saying “no puedo lo siento”. Very bizarre. We shared food together which was well received as we were all ravenous despite not actually doing a lot that day!

The Sunday meant we experienced our first Guatemalan church. It was a very stripped back church which meant we could focus on God and not any of the extremities of more ornate church. Jomara introduced us which was followed by dozens of hello’s, handshakes and kisses by the congregation which was unexpected and sweet. We did our best to translate the (long) sermon but the focus of it is still a bit unclear – fellowship, marriage and contentment all made an appearance. What was interesting was that the people would chip in with points mid-sermon be it anecdotes or other relevant scripture. Intensely hungry, we all devoured our ham salad wraps and got to know each other from lunch onwards with ladles of tea and packet after packet of biscuits.

The in-country orientation was led by Jomara and was very detailed about what we’d encounter and be doing with the kids here. As well as that, she indulged why she’s here which gave us deeper respect for how much she’s sacrificed to serve.

We had little idea about what the kid’s work would involve or even where we would be spending these three weeks. The terminal (called so because it’s right next to the central bus terminal) is where we are spending our weekdays here in Guatemala and it is a harrowing place to see. Our building is just outside the terminal as the terminal itself is actually a humongous fruit and veg, clothes, electronics and ‘anything you can think of’ market – apparently the biggest in Central America which is very believable! When we arrived we were greeted by joyous children, all incredibly excited to see us, which was unexpected and heart-warming.

We took tours of the terminal (5 on each tour). To say it was overwhelming doesn’t cover it as we barely even scratched the surface on just how big that market is. We stuck out severely as non-Latinos which incurred many looks and whistles from the local men who were perplexed by us – perhaps it was the paint stained trousers? It is incredibly large and is segregated into sections but even so it seems impossible not to get lost amongst the fruit and veg (most of which we hadn’t seen before and were intrigued by). The tour ended and we began our duties as helpers to the children, with some of us making paper people which the children drew on and the other half setting up lunch for the 15 or so children.

The classroom is just big enough for the kids to eat and work but space is a luxury here – something entirely evident in the terminal where people live right behind the shop they sell produce in. They have an endless amount of energy which we are envious of as the intensity of the day has drained us somewhat of the ability to hug them every second! It is so clear that the work Jomara does here is valued by them as they were full of heaps of excitement throughout the whole day.

We took them to a park in the afternoon in the sun which was a pleasure because there was colour and space for them to play, the exact opposite of the terminal (albeit it at a glance) where they spend so much of their time.

The day followed the same pattern as the first but we knew more of what to expect than yesterday. The kids still clamour for us when we arrive which is sweet, especially from the children who we recognised from the day before. Today we talked about the creation story (with Victoria asking them in Spanish who created the world and in how many days – they eventually counted to seven) and helped the kids draw their own version of the story. So much is a cause of excitement for these bubbly children, even choosing what colour paper they wanted and what animals they would stick on. Rather selfishly it was also a good exercise to learn/go over the animals in Spanish so that we could help them fully instead of pointing. They seem to appreciate speaking to us in Spanish which is fun since for those of us who can speak Spanish, a bond is already starting to form as they spend the most time with them.

Like the Latin American culture, timings aren’t set in stone but the pace is simultaneously quick so once the children had finished their craft they were soon restless. Thankfully, Carlos (an amazing man who works with the kids every day with the same enthusiasm as if it was his first day) put on Disney’s Moana for them to watch. Tired from a morning of craft, setting up meals and helping with shampooing for showers we all later admitted that we were grateful for the rest too! The film kept scratching however so we made a trip to the park just opposite the house since the sun had just reappeared (the weather is incredib