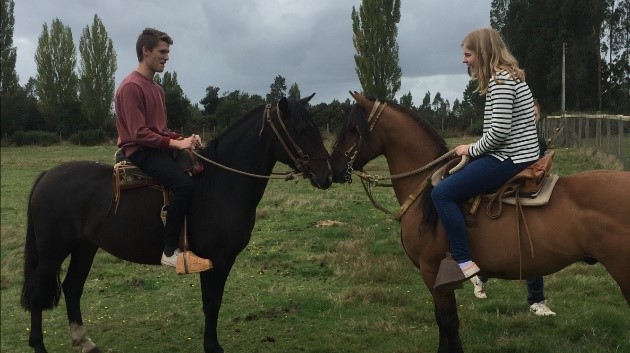 Hola! This week has been yet again full of blessings and fun, albeit a few difficult times with university disappointments and illness, we’ve ended the week happy and in high spirits!

Sunday afternoon took an eventful turn, with April fools galore. Many personal items ended up in the freezer, ketchup in water bottles and eggs in marmite. Hannah and Libby went to Temuco that evening to do the weekly shop and stayed at German’s house on Sunday night and Ruth and Benja’s on Tuesday night.

Monday morning saw us up bright and early, starting work at 9. We spent the day clearing the foliage around the back of our house. Morwenna and Grace were then asked to stay at the school house for Monday, Tuesday and Wednesday night with six of the girls because the teacher was called away on family problems. That left only five of us in the house that evening. Ellie, Ben and Nathanael ran laps of the field whilst Eleanor and Alice watched. All five then cuddled up outside under blankets and watched the stars whilst listening to music. German then started a fire which was fascinating to watch so late at night.

On Tuesday we continued to clear around the church and German continued to work with the power tools. Libby and Hannah returned to us along with the shopping for that week. Hannah had just heard some difficult news about not getting into her first-choice university, Edinburgh. Although understandably disappointed, she has been so strong and mature about the situation and we are all so proud of her! For lunch we had wraps and were joined by Heidi, a missionary who teaches English once a week at the school. She told us her amazing testimony which felt like it could not have come at a more appropriate time for Hannah (God’s timing is perfect).  Alice and Morwenna slept at the school that night because Grace was feeling under the weather. They had a great time with the girls; as well as dance contests and nail painting they also spoke to them about the message of Jesus and the love he has for each of them individually.

Work was postponed on Wednesday due to the rain. This meant that we were able to spend the day resting as well as preparing for the kid’s service in the evening. We had a relaxing day watching the Hunger Games and the Lion King, and then Aldo (one of the locals) let us ride his horses which was great fun! The kids service in the evening was a great success, we used the parachute to illustrate Jesus walking on water, and then we let the kids act out the story for themselves as well as giving them a memory verse.

After Wednesday’s rest day, we were back at work on Thursday, sawing wood and continuing to clear foliage. German then took us in his pick-up truck to collect a large amount of strawberries from the local farmer. These were devoured instantaneously! For lunch we were joined by Aldo, a teacher at the school who brought us a Chilean dish called ‘Humita’ (a combination of maize and water) and was keen to compare cultural and educational differences between England and Chile. Thursday night was the first night of the week that the whole team were back together for the evening so we enjoyed a game of Uno and German and Ben made bread together. Nathanael and Ben then went to bed so Ellie, Eleanor, Grace, Alice, Hannah, Morwenna and Libby enjoyed some girly time playing more games.

We worked again on Friday, removing dead grass and digging a trench around the church.  We also started painting the interior roof panels and sanding down the doors of the church. In the afternoon Gladys from the church congregation treated us to a delicious lunch. In the evening, the whole team dragged a couple of mattresses into the main living area and cuddled up to watch ‘Back to the Future’.

We had Saturday off, meaning that we were able to do a 4-hour long devotional. We did a session of ‘Freedom in Christ’ in which we learnt that our identity is in Jesus rather than the world. It was a real blessing that we had Saturday off to do this, as all of the team were very touched by this message. Ruth, Benja and Karyn came for dinner, we enjoyed lots of soup and bread. Then there was a youth event in the evening, hosted by the school next to where we are staying. About 30 of the youth from the local area gathered together to worship God. There were lots of songs, with dancing and actions that went on for a good four hours, until after midnight . The team were inspired by this style of worship and found that such enthusiasm and passion for God was really refreshing. We then played some games and listened to a short sermon and had food at the end. It was an awesome experience getting to meet and socialise with so many other young Christians.

On Sunday morning we had church, Felipe (German’s son) preached a great sermon on Mark 1 about prioritising God in your life.  We then sung a couple of songs at the front and Grace gave her testimony. Then we hosted German’s family for lunch during which we covered the light topics of evolution, salvation and predestination.

Thank you all so much for your continuous prayers as we approach the half way mark of our time in Chile.

Here are some specific things you could be praying for:

Here are also some things to praise and thank God for: