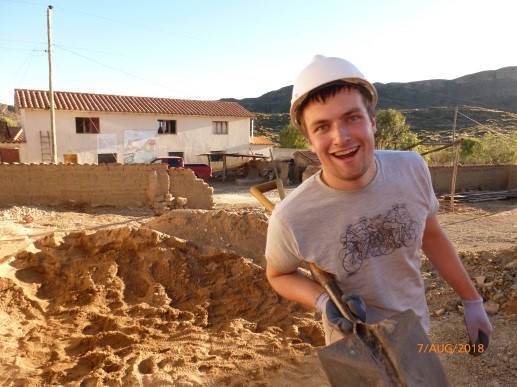 9am, Terminal 3, Heathrow. The day had finally arrived! For some of us this was the first time leaving the continent. There was a general excitement looking forward to how God would use us there but also some nerves not knowing what to expect. Our first flight (and the longest at 9hr 35mins!) left at 12.50pm for Miami. We took advantage of the in-flight entertainment from games of trivia and battleships, to watching a film from a sizeable collection! Overall, it didn’t feel like 9hr 35mins, however, we were all quite tired upon arrival and were looking forward to a sleep on the next flight. At Miami Airport we had a 5hr layover. The first thought in everyone’s (Bethan’s!) mind was food and as this was the USA we looked for a McDonalds but to no avail! We left for Santa Cruz at 10.45.

Even though the overnight flight to Santa Cruz was 7hrs, the plane was quite cramped and we found it difficult the get the sleep we needed. We spent just under 3hrs at Santa Cruz airport before boarding our last flight going to Sucre. The flight was only 45 mins. Our Step Team Coordinators, Louis and Maribel Woodley from Potosi, met us at the airport. It was great to meet them as they would spend a lot of time with us over project. They treated us to Salteña (much like a Cornish Pasty) and a hot drink which was delicious and greatly appreciated as we waited for our last team member, Sam, to arrive. Sam was part of the Step Team to Ecuador and made the journey to Sucre by himself. It was great that he arrived safely! We travelled by taxis to Candelaria, 2 hours away. We were a bit nervous when we saw our taxi driver with a blanket warming his knees and we realized we weren´t prepared for the Bolivian winter!

Our hosts, church leaders and local authorities greeted us warmly over a hot meal at the house we would be staying for the duration. We had warm bread, Peanut soup (except for Sam!), Pork, Potatoes, vegetables and chips in big quantities. We couldn’t finish it all, but it was delicious! Our In-Country Orientation with Louis and Maribel began but they kept it short and simple as they knew we were all tired from little sleep and long flights. The day concluded with a welcome service at the church in Candelaria during which we sang Psalm 23 as a team and introduced ourselves. Now, time to sleep!

We woke up about 7.30 for breakfast at 8.00. There was no working shower so it was a case of a dry one! We ate bread and drank tea for breakfast. After breakfast we split into two groups – Michael and Jack went to Sucre with Louis and Maribel to withdraw cash for the building project and buy food for the week. Anna, Olivia, Bethan and Sam stayed in Candelaria. They were able to start some work on the building site for 1hr 30mins but also start building a relationship with the ladies around the house. They showed them some of the kids’ materials and planned a Sunday school. In the evening it started snowing! This was completely unexpected and we were told it hadn’t snowed in Candelaria in 25 years! (Please don´t panic, we now have hot water bottles and many, many layers – record is 8 haha!)

Today we travelled to the market at Tarabuco. Our transport today was a lorry which was great fun. We had wonderful views of the surrounding landscape that had been snow-capped from the previous evening. Praise God! Upon arriving we walked around the market. There was lots of traditional clothing, rugs and food. We had a set lunch at a cafe. Peanut soup, spicy/roast chicken or veg option and coca tea. We travelled back to Candelaria via lorry. We played a game of Bananagrams before dinner. We then joined the parade for the 193rd anniversary of Bolivian independence which went around the town with music and ended at the school. As there was no church service, Louis preached at home where some of the locals joined us (Colossians 3:9-14) and we also sang!

Today we started off with another Parade for the 193rd celebration. We walked around the town and finished in the school football court where the celebrations continued which included speeches and lots of dancing. The dancers were dressed to represent the different departments of Bolivia. We ordered a barbecue from the school which was delicious.

In the afternoon we were invited to a Christian conference in a local village which was an alternative to 193rd celebrations. One of the authorities, who is a Christian, suggested holding a Christian conference and the others agreed. It was an evangelistic event where they preached the gospel to the community. Praise God for this amazing opportunity! We sang Psalm 23 at the first service and How great thou art at the second – half sang in Quechua and half in English. Views from the village were beautiful but for some (Anna) the altitude proved too much and a lady made a bed for her in a room with lots of bread and goat carcasses, she’s now gone veggie!!

Today was our first day of proper work on the project. We were all eager to begin. The bricks hadn’t arrived but we had other tasks to do. We transferred sand and stones from outside the site to inside. The sand needed further sifting. It was tough work as it was uphill but the team made an amazing start and progressed well. The day was marked by many water breaks to get out of the hot sun. Maribel and Louis also left for Potosi and we were left alone for the first time as a group with our resident translator Olivia. We managed to wash our clothes and have our first shower of the trip. In the evening we helped Sam prepare to preach at church tomorrow evening.

Our first full day without Maribel and Louis! We were already counting down the sleeps until their return! During our morning prayers (during which we prayed the bricks would arrive) we heard the horn of a lorry outside – this was the bricks arriving! We put breakfast on hold and rushed out to help unload the bricks. Quite a few people from the local community chipped in to help. It took us roughly an hour and a half to unload the bricks. Once unloaded I counted a pile of roughly 36 bricks by 10 bricks by 10 bricks. We went back inside for a well-earned breakfast. When returning we continued to sift sand and bring more sand to the site. At lunch we were given a cottage pie dumpling with a lovely onion relish. Delicious! In the afternoon Sam and Olivia (translator) prepared for Sam’s sermon in the evening. We continued adding to the sand pile. In the evening Sam preached on servanthood and we sang lots of songs in Quechua and Spanish. Upon returning from church we went to the dining room and chatted with the ladies from the church – Sam has many fans!

Today we continued to sift the small pile of sand that was left. After a break we returned to the site and began new work lifting large rocks from outside the site up into the front of the site and laying them where the stage will be. This was slow an