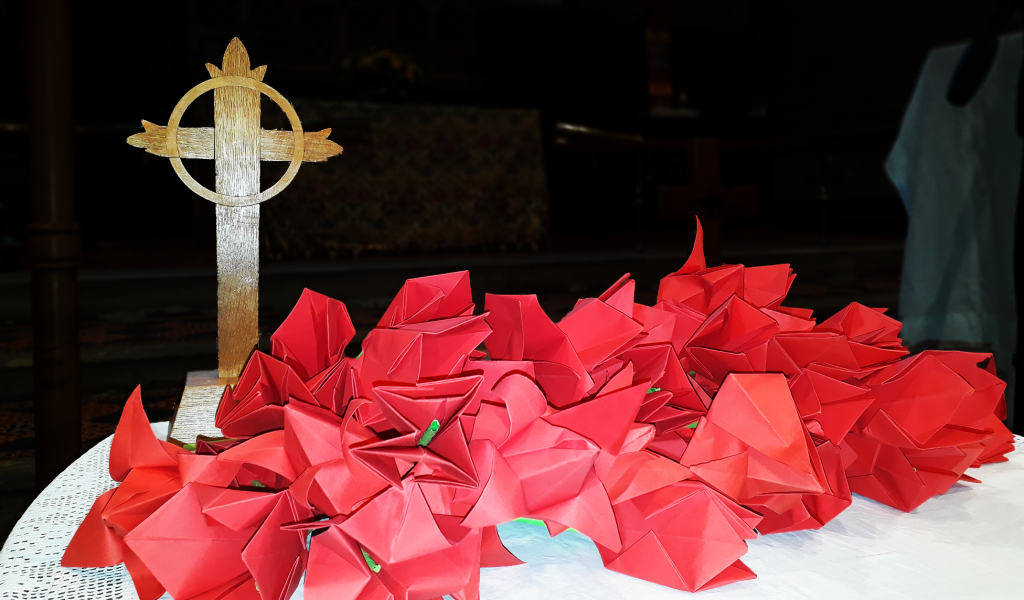 As a bereavement counsellor, Kay Stoker is used to thinking on her feet. But when Santiago asked her this question in the middle of their session, she was caught off-guard. As she scrambled to come up with something worthwhile to say, Kay couldn’t help but wonder where this question had come from.

Santiago, aged 11, responded by telling Kay about a talent of his own: origami.

Over the last year, Santiago has developed a love for origami! After getting hold of used paper, he spends hours creating wonderfully complex designs, filling the room he shares with older brother, Danilo (aged 20).

Kay and her husband Dave have been based in Cusco, Peru, since 2013. Kay’s compassion for people experiencing bereavement has led her to set up the Nueva Esperanza (New Hope) ministry, alongside a Peruvian pastor and psychologist, that runs counselling sessions and bereavement camps for families and individuals experiencing the loss of a loved one. In a culture where talking openly about death is uncommon, the guidance and advice offered in this ministry is helping people come to terms with their loss, and find a greater hope in God. For Santiago and Danilo, this hope seemed far away.

Their dad had died six years ago, and their mum a year ago. Apart from each other, they were alone in life. Danilo and Santiago are two incredibly brave brothers.

Now, Santiago attends a local school which is paid for by the government, Danilo is studying to be a chef. However, finding the money to pay his tuition fee at the college is difficult and he often can’t attend for months on end.

With no government provision, even the cost of living is a constant struggle. Danilo, as sole carer for his young brother, earns money by making crema de leche and empanadas on their two-ring stove in the room where they live. He walks the streets of Cusco, selling them wherever possible throughout the day. Of the little he makes, he saves what he can for his own tuition fees, but most of the money goes on food, gas, water and clothing.

There can be no quick-fix to take away the pain these boys feel. But we thank God for the relationship being built between the brothers and Nueva Esperanza. Through connections with a local church, Danilo and Santiago got involved in the programme, attending personal therapy sessions and a bereavement camp. The programme, which provides a safe space for them to talk, question, feel and be themselves, has been invaluable. They’re now being given the proper resources to process their grief well, and they’re developing a healthy network of support.

While they attempt to find some normality in life, the coming of Mother’s Day brings with it a painful reminder. Mother’s Day (celebrated this year in May across Peru) is a big occasion in the country, and last year it came only six weeks after the death of their mum. Despite this, the brothers decided together to do something positive on that day, in memory of her; something to bless other people and bring joy. As they sat with Kay, discussing ways to cope through it, an idea dawned on them.

So, putting to use Santiago’s talent, the brothers worked hard to make 100 origami roses out of used paper. Then, on Mother’s day, they took to the streets of Cusco, giving them freely to any mothers who were out for a walk with their families.

We had a decision to make, we could have sat in our room and cried and ached inside for our own Mum, or we could go into the streets, share a little happiness, try and see a smile on the faces of other mums and imagine that was our own mum smiling at us.

Kay: The work of Nueva Esperanza can be difficult, but it’s constantly rewarding to see how God transforms lives and restores hope. Please continue to remember us in your prayers, especially praying for Danilo and Santiago as, with God’s help, they begin to make a new life for themselves.

To read other stories of how God is transforming lives across Latin America and beyond, click the link below.

For this and more, you can sign-up to receive a free copy of Latin Link’s bi-annual magazine: Latinfile. Click here to learn more.
By Will On 26th March 2019